Hyper-pigmentation is the darkening of an area of skin caused by increased melanin. Pigmentation means coloring. Your skin gets its color from a pigment called melanin. Special cells in the skin make melanin. When these cells become damaged or unhealthy, it affects melanin production. If your body makes too much melanin, your skin gets darker. Some pigmentation disorders affect just patches of skin. Others affect your entire body. 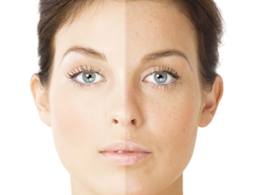 Hyperpigmentation Treatment at Slim Express PuneThere are various causes of hyper-pigmentation, including

HOW TO PREVENT HYPERPIGMENTATION
Wearing a sunscreen of at least SPF 15 daily and avoiding sun exposure is crucial in preventing hyperpigmentation.
Be mindful that discoloration is also in dead surface cells so it is imperative to exfoliate regularly to slough off the build-up, which will help minimize hyperpigmentation.
If you have dry, sensitive or mature skin, it is best to exfoliate 1-2 times a week. If you have combination to oily skin, exfoliating 2-3 times a week is recommended. However, facial scrubs should not be used on acne erupted skin as they are too abrasive and can worsen the condition. Rather, a mild exfoliant should be used such as the Glycolic Foaming Cleanser.

What do you think?